Any accident can result in a serious brain injury – an accident on the job, slipping and falling when you’re out and about, or any motorcycle, car or tractor trailer accident down on I-85 can very immediately and obviously change your life forever as a result of a head injury. 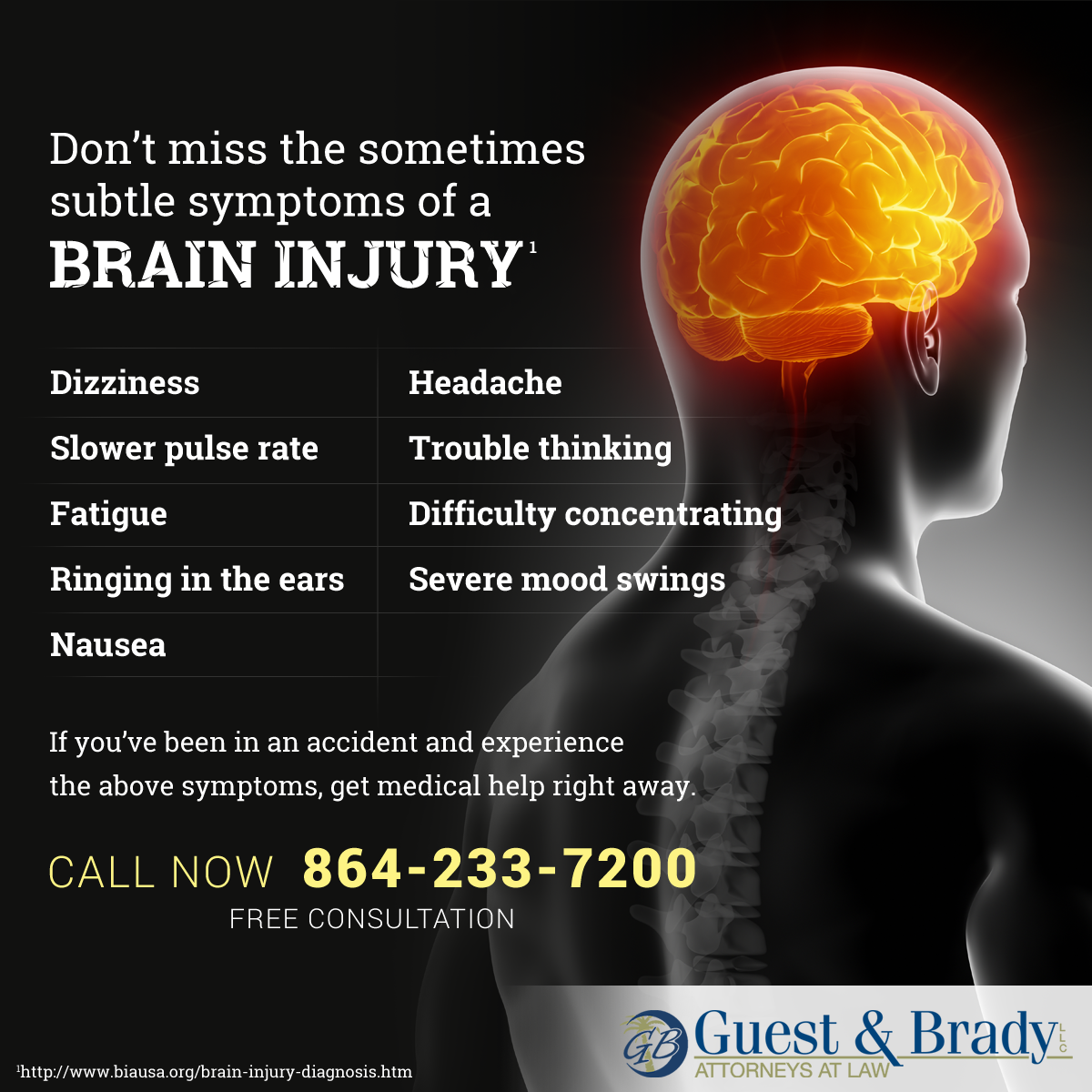 Symptoms of a Traumatic Brain Injury

While in some cases, a traumatic brain injury is obvious, in other cases, it might not be as apparent. Mild concussions may go unnoticed at the time of the injury, but the effects later on can be significant.

Even weeks later, symptoms of a traumatic brain injury (TBI) can manifest. These are sometimes hard to diagnose and treat, but that doesn’t mean they weren’t caused by an accident and haven’t had a profound impact on your life.

Symptoms of a traumatic brain injury include but are not limited to:

If you experience any of these symptoms after being involved in an accident, it is critical that you are evaluated by a medical professional as soon as possible. Even if you are experiencing these symptoms weeks after the accident, you may still be at risk for a TBI.

Brain injuries are typically rated to be mild, moderate, or severe.

A mild brain injury may not render an individual unconscious at all, or may do so for less than 30 minutes. While some symptoms manifest directly after the incident, it’s also possible that they will manifest much later. Symptoms are usually mild and are not permanent.

Accidents That Cause Traumatic Brain Injuries

The most common accidents that result in a TBI include but are not limited to:

Even if an accident didn’t directly cause a TBI, it may have set in motion a chain of events that resulted in brain trauma. The powerful medications prescribed to victims of serious accidents can cause further damage – like lightheadedness, fainting, restricted oxygen flow to the brain, and even stroke – which can ultimately result in serious brain injury.

TBIs can be terrifying and life-altering. Broken bones will heal with time, but often, serious brain injuries have a serious impact the rest of your life, requiring you – and your family – to cope with a new normal. If you suspect that yourself or a loved one may have been the victim of a traumatic brain injury, it’s important that you act quickly and get medical evaluation as soon as possible.

You and your family don’t have to face the struggle of facing a TBI and getting medical help alone and without resources. Contact the personal injury lawyers at Guest & Brady, who have helped families just like yours cope with serious head injuries, TBIs, and other consequences resulting from serious accidents.

Our brain injury attorneys have specific experience working with the victims of a TBI and can help you and your family connect to the help you need to get through this difficult time. You can trust that when you put your case in our hands, that you will receive the comprehensive, zealous legal representation you need to move forward after a life altering and devastating accident. Call us today for a free consultation to discuss your unique case at (864) 233-7200.

Free Case Evaluation 100% No Obligation to You

Get a Free Evaluation
Page load link
Go to Top